For months after 9-11, we were all Americans

This is my first post on this site. Raymond was kind enough to invite me to post here.

I am a Senior Chaplain with the International Fellowship of Chaplains. We work with police officers, firefighters, emergency responders and survivors of traumatic events. Some of us work in prisons, some with bikers, you name it, we're pretty much there in times of need.

Raymond interviewed me yesterday and he asked what a Chaplain does. I told him that while we are often confused with pastors, ministers, other members of the clergy, our mission is to take care of all God's children, where they are and when they need help. There are some Chaplains associated with churches because they also happen to be members of the clergy as well. For us, our mission is in our communities and for me, it's been nationally and internationally because of the blogs and website. I post over at http://www.woundedtimes.blogspot.com/ and have a website at http://www.namguardianangel.com/ I am editor and publisher of both along with making videos to provide support and education on Post Traumatic Stress Disorder.

While I've been doing this work since 1982, focusing on veterans, it has lead to working with police officers, firefighters, their families and survivors of trauma as well as the current military. I became a Chaplain last year.

I am married to a Vietnam veteran and that's how I got into all of this. I've not only researched it, I live with it. We're members of a lot of organizations but I am most grateful to the IFOC. I just started a Charter of the IFOC. I am certified, trained, licensed and ordained by the IFOC, certified in crisis intervention and management, debriefing plus disaster and extreme event preparedness (DEEP)

Now that you know a bit about me, you'll know where the rest of this post is coming from. It is a cross post from my blog. It is very difficult to think of things to post on other sites to share but this one I believe is important to share considering the anniversary of September 11th is coming up soon.

I hope to be posting here again soon. 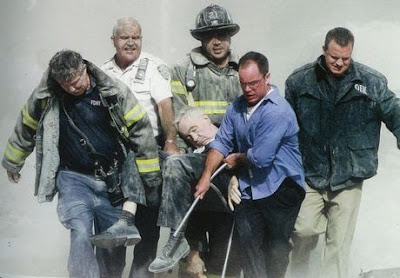 For months after 9-11, we were all Americans
by Chaplain Kathie

Everyone in this country remembers where they were the day our sense of security was lost. We watched it happen on TV sets from coast to coast. Some had to watch it happen right in front of their eyes in New York and Washington DC. We were horrified knowing that in one horrific moment lives could be so violently changed. People just going to work in a normal day, were suddenly gone.

We think about the people on the planes,in the Towers and working in the Pentagon. They all got ready for one more normal day, drinking coffee, eating breakfast, dressing and driving off, away from their families thinking what they would do after they returned from work that night. Some never returned. Others returned with the same body, but not the same inside.

Police officers and firefighters rushed into the burning buildings while everyone else was running away. While citizens were able to return home to cope with what they just survived, the police and firefighters were still trying to save lives. They stayed after the Towers fell to try to find people trapped and to find their own friends.

For months after 9-11, we were all Americans. We bought flags. Some for the first time in their lives. We bought them for our homes and for our cars. We bought them in honor of the lives lost in unity. People were a lot nicer to each other back then. The sense that their own lives could end in an instant as well, made them appreciate family and friends more. Some were transformed for the better that day, but sooner or later, all that was good and patriotic faded away and people started to scream at each other again. Flags came down. Concerts for the families stopped. While we remembered those horrible events, we forgot about the families left behind.

The heartbreak of families remained long after the funerals but they got on with their lives as best as they could. Firefighters and police officers returned to work in New York City dealing with the average traumatic events of normal fires and accidents, crimes and domestic disputes. They had a job to do no matter how much they were hurting, but we never really noticed them. After all, we never really do think of any of them unless we need them.

What is really telling is that while we may from time to time remember the firefighters and police officers of New York City, we never seem to remember that police and firefighters rushed in from other states to help. We don't think about the construction workers coming in from New Jersey and other states. After all is said and done, what they did, the images of all of them working together, side by side, never really took hold of our hearts. We forgot that police and firefighters risk their lives for all of us but long after we need them, the events they respond to can take hold of their minds just as much as the men and women in the military.

Now this article shows that the children left behind still come together with their own common bond. They find friendship and support being understood by their own as only others can understand. Somehow where they live, what incomes their families have, how they vote, what divides them, is all ignored as it was that day in America. What matters most is that they are there to support each other as humans, as Americans, and as survivors of a great loss.

PERU, Mass. - Julia Coombs clears the lunch tables of stray cups and napkins, then rushes over to join her friends in a line dance. The dining room is a blur of sweaty bodies and a cacophony of voices dancing and singing to “The Music Man.’’ Julia is 15, a confident, chatty counselor-in-training at America’s Camp.

Six years ago, she was a shy 9-year-old who had never been away from home. And she didn’t want to talk about her father, Jeff, who was killed on 9/11 when American Airlines Flight 11 crashed into the North Tower of the World Trade Center. Today she’s fine with the topic, and even helps younger kids talk, if they need to, about the parent they lost that same day. “There’s like nobody else who knows what you’ve been through, but here, everybody’s on the same page,’’ says Coombs, who’s from Abington.

That page, or day, is Sept. 11, 2001, and the kids at this camp in the Berkshires lost a parent in the terrorist attacks. America’s Camp opened in 2002 and hosted 78 kids shellshocked from their loss. This year it plateaued at 260, the same as last year. That’s because many of the original campers are in their 20s now. Taking their place are the youngest campers, 7 and 8 years old, who were infants - or even in utero - when their parent died.

The idea, back in those chaotic early days, was to give the “9/11 kids’’ a place where they could hide out and hang out, an escape from the grief and curiosity that shadowed them. There are also a handful of children of police officers and firefighters who died in the line of duty.

If you live in the Orlando area, there is an event at 1st Baptist Church on September 8th at 6:00 p.m.. It is to honor the first responders. OperationSafety91 is honoring the men and women willing to lay down their lives for the rest of us with a 6,000 flag tribute, much like after 9-11 when the entire nation was covered with flags. For more information go here.

If you are one of our everyday heroes, please stop by to see me so that I can shake your hand and thank you. If you or anyone else you know is having a hard time coping with PTSD, please feel free to talk to me.


Memories of 9-11 linger on and so do a lot of other memories that sometimes you need help with. These children know that what binds them together is stronger than anything else. Adults need to learn this lesson as well and find strength from others who do understand.

Posted by Kathie Costos at 5:56 PM No comments: Links to this post