Editor's Note: Both the program host and the guest are former servicemembers.

ABOUT THE PROGRAM
MoJoe, the host of Talk Radio Portal says of his program, it is “where we try to invoke you with subjects from Today's News, Sports, Music, and of course a little Politics. I am passionate when it comes to those serving in the Military. I love to dabble in Sports and occasionally will address the controversial events within. I have a different attitude when it comes to Politics, I will listen to the views and then give everyone my common sense opinion. There's no need to wrap things up in a pretty package, and then jam it down everyone's throat. Let the everyday person be heard!”

ABOUT RAYMOND E. FOSTER
Raymond E. Foster was a sworn member of the Los Angeles Police Department for 24 years. He retired in 2003 at the rank of Lieutenant. He holds a bachelor’s from the Union Institute and University in Criminal Justice Management and a Master’s Degree in Public Financial Management from California State University, Fullerton. He has completed his doctoral studies in business research. Raymond is a graduate of the West Point Leadership program and has attended law enforcement, technology and leadership programs such as the National Institute for Justice, Technology Institute, Washington, DC.

Raymond has been a part-time lecturer at California State University, Fullerton and is currently a faculty advisor and chair of the Criminal Justice Program at the Union Institute and University. He has experience teaching upper division courses in law enforcement, public policy, technology and leadership. Raymond is an experienced author who has published numerous articles in a wide range of venues including magazines such as Government Technology, Mobile Government, Airborne Law Enforcement Magazine, and Police One. He has appeared on the History Channel and radio programs in the United States and Europe as subject matter expert in technological applications in law enforcement.

His first book, Police Technology is used in over 100 colleges and universities nationwide. He latest book, Leadership: Texas Hold ‘em Style has been adopted by several universities for course work in leadership; by several civil service organizations and required reading for promotion; and, has been well received in the wider market.

ABOUT THE BOOK
Using poker as analogy for leadership, Captain Andrew Harvey, CPD (ret.), Ed.D. and Lieutenant Raymond E. Foster, LAPD (ret.), MPA found the right mix of practical experience and academic credentials to write a definitive book for leaders. Working together, Harvey and Foster have written Leadership: Texas Hold em Style. Most often leaders find they are given a set of resources people, equipment, funds, experience and a mission. As Foster noted, "You're dealt a certain hand. How you play that hand as a leader determines your success."

More than a book: A fun and entertaining journey through leadership that includes an interactive website to supplement knowledge gained from the book.
Proven and Tested: Not an academic approach to leadership, but rather a road-tested guide that has been developed through 50-years of author experience.
High Impact: Through the use of perspective, reflection, and knowledge, provides information that turns leadership potential into leadership practice.
Ease of Application: Theory is reinforced with real-life experience, which results in accessible and practical tools leaders can put to use immediately.
High Road Approach: Personal character and ethical beliefs are woven into each leadership approach, so leaders do the right thing for the right reasons.
Uses Game of Poker: Rather than a dry approach that is all fact and no flavor, the game of poker is used as a lens through which to view leadership concepts. 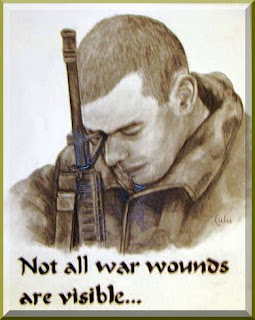 Those returning from Iraq may not show sign of problems right away, study notes

(HealthDay News) -- More than 40 percent of the U.S. soldiers from the Iraq and Afghanistan wars seen at VA hospitals suffer from mental health disorders or psychosocial behavioral problems, a new study shows.

Curiously, the researchers from the San Francisco VA Medical Center found that most mental health diagnoses were not made in the first year that a veteran entered the VA health-care system, but several years after. This finding supports the recent move to extend VA benefits to five years of free health care, which allows VA doctors the time to detect and treat more mental illness in returning combat veterans, the researchers noted.

"After the start of the Iraq War, there is a growing burden of mental illness, particularly post-traumatic stress disorder (PTSD), that will require increased allocation of resources for better detection and early intervention to prevent chronic mental illness, which threatens individual veterans, their families and communities," said lead researcher Dr. Karen Seal, an assistant professor of medicine and psychiatry at the University of California, San Francisco.

The report is published in the July 16 online edition of the American Journal of Public Health.

For the study, Seal's team collected data on 289,328 Iraq and Afghanistan veterans who sought health care at VA medical centers from 2002 to 2008.

Among these returning vets, 106,726 were given mental health care. These included 62,929 diagnosed with PTSD and 50,432 diagnosed with depression. That's nearly 37 percent of veterans, the authors noted.

"When the definition is expanded to include diagnoses of mental health disorders or psychosocial behavioral problems such as homelessness, or both, 43 percent of these veterans received these diagnoses," Seal added.

In addition, women had a higher risk for depression, but men had more than twice the risk for drug use problems, the researchers found.

Since the start of the Iraq war, mental health problems increased more than fourfold among active-duty personnel and sevenfold for members of the National Guard or Reserve, Seal said.

Moreover, active-duty enlisted veterans in the Army rather than other service branches, or who had multiple tours of duty, thus more combat exposure, were at greater risk for PTSD, Seal said. This was not seen in National Guard and Reserve personnel, she noted.

Mark Kaplan, a professor of community health at the School of Community Health at Portland State University in Oregon, noted that the study only covers vets who have received care at the VA, but there are many more with serious mental health problems that are either seeking care privately or not at all, he said.

"This study adds to what we know about this population, however, that's the veterans who seek care at the VA system. But if you look at the total population of veterans from all wars, there are one-third of all veterans who have these problems," Kaplan said.

Doctors who are not connected with the VA but who see veterans need to ask them about any mental health issues they have, Kaplan said. "They need to be aware of the risks associated with veteran status, and in particular those who served in Iraq and Afghanistan," he said.

Kaplan added that it is not uncommon for problems such as PTSD to arise years, even decades, after service. "We don't know the full emotional toll of the wars in Iraq and Afghanistan," he said.

Simon A. Rego, associate director of psychology training at Montefiore Medical Center in New York City, says that "while the results may be somewhat inflated due to the researchers' inability to assess data on clinical outcomes, potential treatment outside of the VA system, or even subsequent deployments, they are nevertheless, stunning."

The authors found a much higher percentage of veterans enrolling in the VA now than at any other time in history: 41 percent since 2002 versus 10 percent of Vietnam veterans. And, Rego noted, new mental health diagnoses in 2008 were six times higher than in 2002 -- 37 percent versus 6.4 percent.

"An important and often overlooked finding here was that a lack of social support -- being separated, divorced, widowed, etc.-- may pose a serious risk for new post-deployment mental health problems," Rego said.

This underscores the need for ancillary social support services for returning veterans who are unmarried and/or without social support, he said. "All too often we focus on treating the symptoms but fail to address the individual's social context. Based on the data here, a failure to do so could lead to increased risk in developing new mental health problems."

For more information on the mental health toll on soldiers of the war in Iraq and Afghanistan, visit the U.S. National Center for PTSD .

Posted by Unknown at 10:00 AM No comments: Links to this post