In a statement summarizing the meeting, chief Pentagon spokesperson Dana W. White said Mattis and Wei openly and candidly discussed a broad range of issues important to the U.S.-China relationship.

Mattis reaffirmed the agreement between President Donald J. Trump and Chinese President Xi Jinping for a defense relationship that plays a stabilizing role in the overall bilateral U.S.- China relationship, White said.
“He also emphasized that the U.S. and China bear responsibility for military-to-military relationship that serves the interests of both countries and the security of the Indo-Pacific region,” she added.
Posted by American Heroes Radio at 1:47 PM No comments: 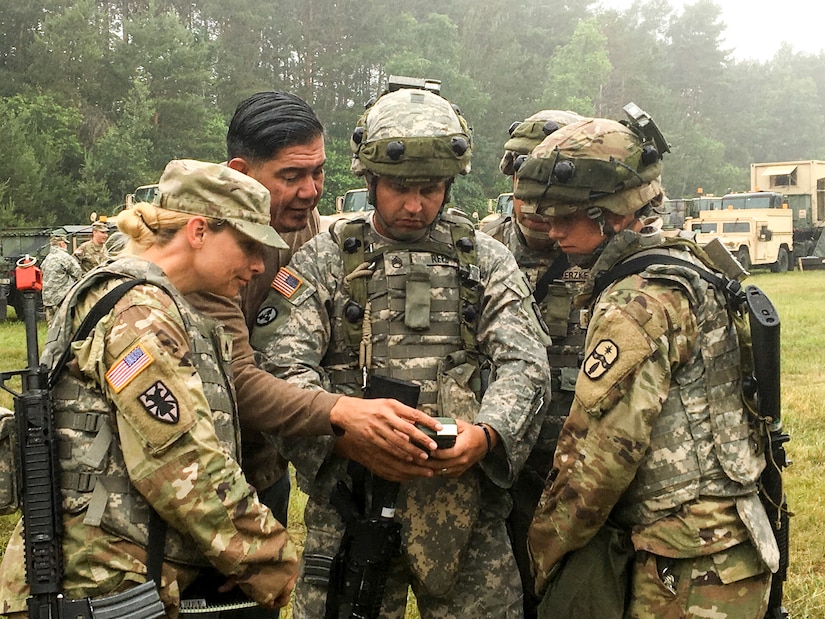 CAMP GRAYLING, Mich. -- Knowing your location and the location of the enemy is paramount on the battlefield, and with the advent of satellites and GPS, soldiers can pinpoint their positions down to the meter. But what happens when that signal is jammed?

“There are adversaries out there with the capability to deny, degrade and disrupt our capabilities,” said Army Capt. Kyle Terza, chief of home station training for USASMDC. “The threat is out there and, while we may not be facing it right now, if we are looking towards the future, we have to be trained and ready to operate without it.”

Terza’s team provides training and resources to soldiers maintaining communication and data networks and those out in the field who are most likely to encounter electronic warfare.

“We’ve been so focused on counterinsurgency, it’s good to train for dealing with adversaries with comparable technologies,” said Army Staff Sgt. Matthew Merzke, a squad leader with the Ohio Army National Guard’s 1487th Transportation Company, located in Piqua, Ohio. “It’s out there and we need to know how to deal with it.”

Most soldiers are familiar with the Defense Advanced GPS Receiver, or DAGR, commonly referred to as a "dagger." It's a hand-held GPS receiver that is used in conjunction with many Army systems such as satellite receivers and battlefield command systems, but how they work is a mystery to many.

“A majority of our younger soldiers have probably never even heard of electronic warfare or have been exposed to it,” Terza said. “It was a great training opportunity for them.”

Soldiers were able to get hands-on with their DAGRs, learning how to recognize when they were being jammed and how to mitigate the electromagnetic interference. With the team from USASMDC offering guidance, soldiers were able to triangulate and find the device that was blocking their signals.

“This is stuff we need to know to be able to train better … to keep [soldiers] safe and bring them home alive,” Merzke said.

By the end of the training, the soldiers had learned enough to be able to bring the instruction back to their units to help others understand the challenges and how to adapt.
“They understand how to recognize it, how to report it and who to report it to.” Terza said. “If they do enter a contested environment, they are prepared for it.”
Posted by American Heroes Radio at 1:31 PM No comments:

WASHINGTON -- Infantry soldiers could receive another eight weeks of training, stretching the instruction from 14 weeks to 22 weeks, Sgt. Maj. of the Army Daniel A. Dailey said during a forum at the Pentagon, June 25.

The extended training will kick off in a pilot program beginning in July and ending in December, Dailey said. Following the pilot, it’s expected the redesigned One Station Unit Training, or OSUT, would start in 2019, he added.

OSUT is a training program in which recruits remain with the same unit throughout Basic Combat Training and Advanced Individual Training. Army training programs are conducted this way, including those for infantry, M1 Abrams crew, combat engineers, cavalry scouts, and military police.

The goal of the extended training is to improve infantry readiness, lethality and proficiency before the soldiers arrive at their first duty station, Dailey explained.

Dailey said extending the training is neither new nor urgent. “We've been looking at it for a long time,” he said of the additional eight-week instruction.

“We know we can get a better product if we make it long. If we kept people in basic training for a year, we could make an even better product. This is a balance between requirements, resources and readiness and time. So, there's no urgency driving this other than the fact that we know that we can do better,” the SMA said.

The Army has packed a lot into basic training, and it needs to be extended, he said.

“We can do better, and the nature of the complex environment we live in is really what’s driving us to give our units a more capable product in the end,” Dailey said.

Extending OSUT involves increasing readiness and thus preparing for the future, he said. “The pilot program is the first step toward achieving our vision of the Army of 2028,” adding to increased lethality, he added.

Some areas of concentration in the 22-week OSUT pilot include additional weapons and vehicle maintenance training and extended field training exercises, he said.

Extending training in other combat arms is dependent upon the results of the infantry pilot program, the SMA said.
Posted by American Heroes Radio at 1:20 PM No comments: