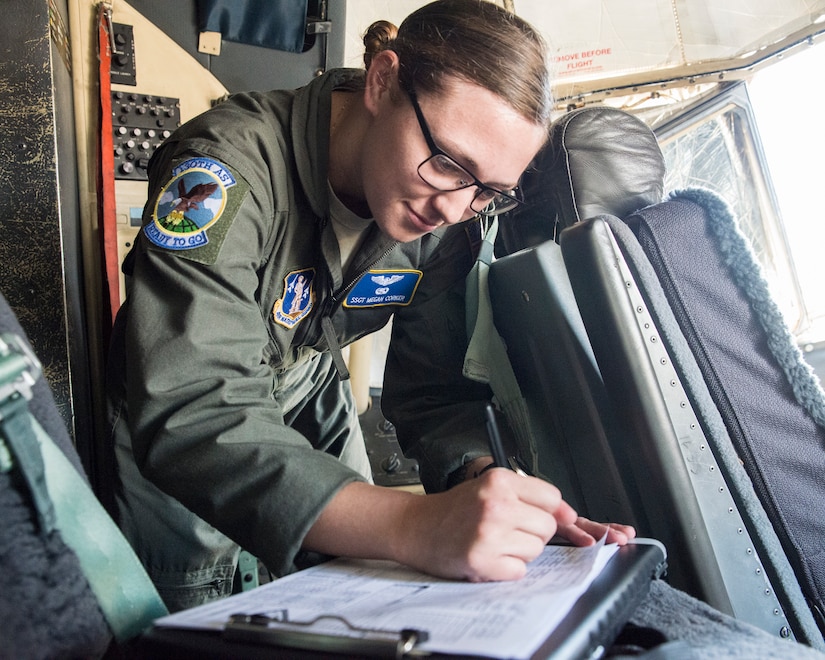 LITTLE ROCK AIR FORCE BASE, Ark. -- Air Force Staff Sgt. Megan Corker is here training to be an Air Force flight engineer, which is an enlisted member of a flight crew who monitors and operates the complex systems in an aircraft.

To become a flight engineer, an airman must first have served in one of several maintenance career fields and be selected to participate in the program. The entire course is about 11 months long, with six of those months spent here for academic and flying training. From C-130H Hercules simulator training, to performing on the actual aircraft, Corker broadened her perception and knowledge of the flight engineer career field.

“As soon as she got here we realized she was an above-average student and we wanted to cut her training short,” said Air Force Master Sgt. David Roles, the lead flight engineer instructor with the Arkansas’ Air National Guard’s 154th Training Squadron. “She actually only had eight of each training event, which is not the norm. I’ve never seen anyone proficiency advance that much before. We had to check the regulations to make sure we could even do that.”

Support and encouragement is essential to the success of anyone who is ready to set goals and new milestones in their life. Corker attributes her drive to excellence to her father, who taught her to always give 110 percent in everything she does. She applies this outlook throughout her life as well as in her former career as a C-130 crew chief. While her father encouraged her throughout her life, her previous supervisor played a key role in her decision to pursue the goal of becoming a flight engineer.

“My supervisor from my old shop definitely instilled in me the work ethic that I have now,” Corker said. “I knew from the beginning that I always wanted to fly, and he cheered me on the whole way when I told him what I wanted to do. He was fully supportive of me.”

Corker said she always knew she wanted to be an aircrew member. She chose to begin her Air Force career as a maintainer in order to ensure she was familiar with all aspects of the aircraft, making her new career as a flight engineer possible. While she always carried the prospect of becoming aircrew, her path became clear during an exercise that allowed her to see firsthand what a flight engineer does.

“I’ve always had an interest in becoming aircrew. Watching everyone work made me realize that becoming a flight engineer was just what seemed right for me,” Corker said. “Being a prior maintainer definitely helped, but I didn’t see any reason not to give my all and maybe add a little extra effort in there. I’m excited to learn more and do more as a go forward and move on.”

During her training here, Corker learned the different responsibilities of her new career field. From training in the flight simulator to flying in the C-130H, the steps she took to complete her training were tedious and time-consuming, but she says it was worth the effort in the end. She credits her success at the school to not only her military background, but also to her instructors.

“Putting everything you’ve learned together and finally getting to fly, that’s that was my favorite part of this whole process,” Corker said. “It’s really cool how it all works when you finally get to do the job.”

It takes a dedicated person to become an instructor. Handing down knowledge from one flight engineer to another takes patience and perseverance on all levels. While it is sometimes a tedious and seemingly unrewarding task, instructors within the unit say that every step is worth the challenge. Roles said that watching a student finally grasp an idea they have been struggling to understand is one of the most rewarding parts of his job.

“I enjoy being able to teach brand-new individuals. Regardless of what stage in their career they are, they volunteered to become an enlisted flyer,” said Air Force Master Sgt. Jason Terry, the 154th TRS assistant flight engineer superintendent. “Teaching them and sharing relevant experiences here and the things you’ve encountered as a flight engineer in an operational unit is very rewarding.”
Posted by Criminal Justice News at 10:49 AM No comments: Links to this post

RUKLA, Lithuania -- Army paratroopers with the 82nd Airborne Division deployed here to participate in an interoperability/readiness exercise with NATO allies and other U.S. partners.

Elements of the division flew non-stop aboard a C-17 Globemaster III aircraft from their home at Fort Bragg, North Carolina, to Lithuania and Latvia, where they parachuted into their respective drop zones during the early morning hours, June 9.

“We flew over 7,000 kilometers from our location in North Carolina, performed one aerial refuel and then dropped in here [Lithuania] with enough combat power and communications to reach back to our home station and partner nations,” said Army Lt. Col. Scott Pence, the commander of the jump near Rukla, Lithuania.

Pence and other members of the division’s 3rd Brigade Combat Team jumped as part of the annual Swift Response training exercise.

“By working with our NATO allies and partner nations, we are able to maintain and strengthen our interoperability,” Pence said. “Every time we do an exercise like this and work with the Lithuanians, the Polish or Latvians, we are able to test our communication systems, our signals and also our battle tactics, techniques and procedures.”

After jumping in, the soldiers quickly regrouped and began securing the airfield. As part of the exercise, Lithuanian soldiers played the role of opposition forces, creating a more-realistic training scenario and further validating the division’s capabilities as a global response force.

“This is a readiness exercise,” said Army 1st Lt. Nathaniel Volk, with the 307th Engineer Battalion.

The 82nd Airborne Division is a rapid-deployment force, which means that with 18 hours’ notice, they will strategically plan, deploy and secure main objectives. Swift Response 18 allowed the participating units to train according to their mission focus.

This exercise demonstrates the division’s ability to respond rapidly, and its resolve to assist its NATO allies and partners, Volk said.

“I am very motivated,” said Army Pvt. Daniel Guevara, with the 1st Battalion, 508th Infantry Regiment. “This is the whole purpose of our training: to show our allies our readiness and show our command we are ready to go anytime, anywhere.”
According to a U.S. Army Europe statement, Swift Response 18 promotes readiness of participating units, while strengthening U.S. ally and partner capabilities and fostering trust. The combined training opportunities that it provides greatly improves interoperability among participating NATO allies and key regional partners.
Posted by Criminal Justice News at 10:40 AM No comments: Links to this post

PAHOA, Hawaii -- Since June 7, engineers with the Hawaii Army National Guard have been constructing a community of emergency "micro-shelter" housing units here for residents displaced by the ongoing Kilauea eruption.

Sometimes working in pouring rain and mud, the soldiers are part of a community effort led by Hope Services Hawaii, a faith-based non-profit organization. The land on which the new community is being built was provided by a local church.

The initial phase of the project will make 20 housing units available to families, many of whom are now living in evacuation shelters, cars and tents. In addition to providing the new residents with shelter, the new community will give the families much-needed privacy while helping to alleviate demands on evacuation shelters. First priority will go to senior citizens and families with children.

"It's important to help the people affected by the lava flow, to help the kids at the shelters, the elderly people," said Army Capt. Matthew Driggers, commander of the Hawaii Army National Guard’s 230th Engineer Company, which provided 48 soldiers to support the effort. "I take it very personally and want to help out."

Members of the 230th, which provided much of the skilled labor to construct the homes, have been working side-by-side with volunteers from local contracting companies and charitable organizations to clear and prepare the land and begin initial construction of the shelters.

Army National Guardsmen, contractors and volunteers descended on the site following an early-morning ceremony June 9. By the end of the day, the outer structure and roofs of the micro-shelters were in place. Interior work, such as installing drywall, will be performed in coming days.
The new community has been dubbed "Sacred Heart Shelter" and organizers said they hope to have it ready for move-in soon.
Posted by Criminal Justice News at 10:31 AM No comments: Links to this post